About The Tetepare Descendants' Association

When the threat of commercial logging loomed over Tetepare, the descendants of Tetepare's former inhabitants came together and formed an alliance to become the Tetepare Descendants' Association, or TDA. The goal was to protect and conserve the island for the benefit of all descendants and future generations. More than 3000 descendants have joined the Tetepare Descendants' Association, making it one of the largest landowners' associations in the Solomon Islands. The TDA are recognised as the legal owners of Tetepare Island.

The TDA is a registered Solomon Islands charitable organisation with an Executive Committee of elected representatives. The TDA constitution states that our aim is to unite Tetepare's landowners to manage and conserve Tetepare and its natural resources for the benefit of present and future generations descended from Tetepare Island. TDA members who have been instrumental in the establishment of TDA and conservation of the island include Harry and Mary Bea, Allan Tippet Bero Lloyd Hodge, Henry Seda, Peter and Sara Siloko, Petrie Sute, Kido Dalipada and inaugural chairman, Jack Daniels.

Today, the TDA has transformed from a fledgling landowners' organisation into a world-class community-based conservation organisation, responsible for one of the largest integrated land and marine conservation initiatives in the country.

We have built a field station on Tetepare and established the largest contiguous marine protected areas in the Solomon Islands – a 13-kilometre no-take zone. The Marine Protected Area or MPA supports healthy populations of fish species, large and small, as well as species such as the green snail and giant clam, which have disappeared from many parts of the Solomons.

We employ rangers and marine monitors to patrol and monitor the MPA, and conduct scientific research and conservation programs.

With funding from the EU, we have created an ecolodge on Tetepare for tourists, which employs local people and raises money to assist the conservation program. Ecotourists come from around the world to enjoy Tetepare's pristine beauty and unique wildlife. Visitors are inspired by seeing our conservation project in action and visitor numbers to the Tetepare ecolodge are growing every year.

The success of the Tetepare project lies in its ability to provide real benefits to its communities. One of the most tangible benefits is employment opportunities. We employ more than 30 casual hospitality workers, including cooks and guides. To manage and run the conservation program, we employ 12 rangers who work in rotating shifts, six marine monitors, six female seagrass monitors and three boat drivers.

Many more local community members have benefited from the project through casual work in construction on the island, and through the sale of vegetables to the ecolodge. 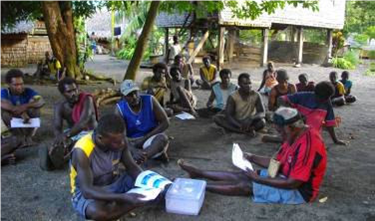 Australian-based biologists and long-time supporters of the TDA John Read and Katherine Moseby continue to support the Tetepare Project as TDA patrons. The pair visit the island at least once a year to provide advice and guidance.

As the conservation program expands, so too will job opportunities for community members. In recent years, we have employed a local Sustainable Livelihoods Coordinator and recruited a Hospitality Supervisor.

We also run a successful scholarship program, to help our members who are struggling to pay for their children's school fees. More than 400 children have benefited from educational scholarships funded by donors since 2005 and the number of scholarships offered is growing every year, as the conservation project expands.

All over the world, fisheries are collapsing, and the Pacific is no exception. But the waters around Tetepare support healthy fish populations, thanks to the ranger-enforced MPA. While Tetepare's MPA is a permanent no-take zone and cannot be fished, the area acts as a nursery and refuge for fish, and ultimately helps to boost fish numbers outside the protected area. Regular marine monitoring has shown Tetepare's reefs and fish numbers are healthy, both inside and outside the MPA.

Descendants come to the island regularly to harvest resources. They fish, dive for trochus and crayfish and hunt pigs. The island, with its abundant resources, is seen as a larder for feasts, where people can access good stocks of resources thanks to the sustainable management practices of the TDA. We hope to lead by example – to show people how conservation can be a benefit rather than an administrative burden. 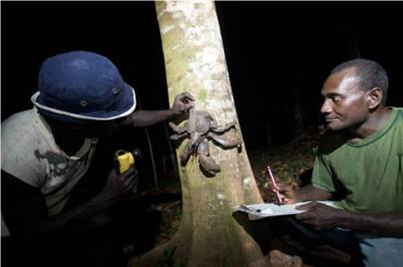 The TDA holds regular awareness meetings in our member communities to explain Tetepare project activities, as well as to educate and empower our members to sustainably manage the natural resources in their own local areas and conserve their environments. Our staff members are also encouraged to teach their own communities more about conservation.

The TDA has worked hard to ensure women are actively involved in the Tetepare project, and included in training programs and employment opportunities. The TDA has run several workshops for women from TDA communities, including a WWF-funded Women in Fisheries workshop on Tetepare, for women from Rendova Island, about the sustainable use of fisheries resources, and a Small Business Management course for women from Rendova run by the College of Higher Education. TDA women have also received training in cooking, guiding and hospitality and are employed in a range of roles within the Tetepare project, including hospitality, guiding and conservation monitoring. A team of female seagrass monitors conducts an annual Seagrass Watch and  clam survey on Tetepare. TDA constitution mandates at least three women be included in the executive committee of local elected representatives who oversee the project.

We are currently expanding our conservation program with the help of international donors, and hoping to inspire communities across the Solomons and the Pacific to follow in our footsteps.

We are proudly sponsored by: